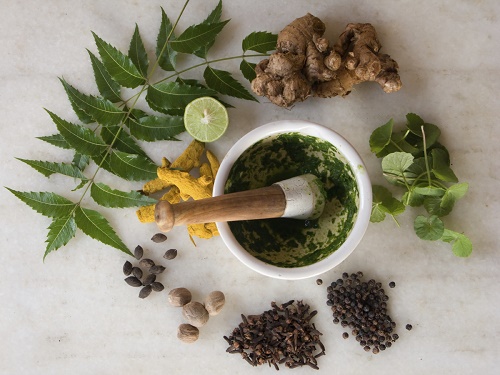 Ayurveda is the oldest surviving complete medical system in the world. Derived from its ancient Sanskrit roots – ‘ayus‘ (life) and ‘ved‘ (knowledge) – and offering a rich, comprehensive outlook to a healthy life, its origins go back nearly 5000 years. To when it was expounded and practiced by the same spiritual rishis, who laid the foundations of the Vedic civilisation in India, by organising the fundamentals of life into proper systems.

The main source of knowledge in this field therefore remain the Vedas, the divine books of knowledge they propounded, and more specifically the fourth of the series, namely Atharvavedathat dates back to around 1000 BC.Of the few other treatises on Ayurveda that have survived from around the same time, the most famous are Charaka Samhita and the Sushruta Samhita which concentrate on internal medicine and surgery respectively.

The Astanga Hridayam is a more concise compilation of earlier texts that was created about a thousand years ago. These between them forming a greater part of the knowledge base on Ayurveda as it is practiced today.

The art of Ayurveda had spread around in the 6th century BC to Tibet, China, Mongolia, Korea and Sri Lanka, carried over by the Buddhist monks travelling to those lands. Although not much of it survives in original form, its effects can be seen in the various new age concepts that have originated from there.

No philosophy has had greater influence on Ayurveda than Sankhaya’s philosophy of creation and manifestation. Which professes that behind all creation there is a state of pure existence or awareness, which is beyond time and space, has no beginning or end, and no qualities. Within pure existence, there arises a desire to experience itself, which results in disequilibrium and causes the manifestation of the primordial physical energy. And the two unite to make the “dance of creation” come alive.

Imponderable, indescribable and extremely subtle, this primordial energy – which and all that flows from it existing only in pure existence – is the creative force of all action, a source of form that has qualities. Matter and energy are so closely related that when energy takes form, we tend to think of it in terms of matter only. And much modified, it ultimately leads to the manifestation of our familiar mental and physical worlds.

No products in the cart.